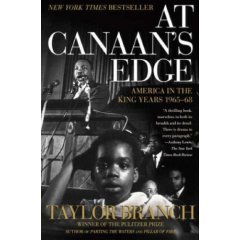 It is Martin Luther King, Jr. day and each year, especially later in the day, I feel like I sometimes do on Sabbath; something is special, and something is not right. There have been times, a long time ago for me, I’m afraid, when this important day brought forums, protests, anti-war activity and worship in black churches. These days had me feeling somehow more authentic in my admiration of the Nobel Prize winner. Today, my little framed picture of King with a rough cop twisting his arm behind his back in a classic 1958 arrest scene—as iconic for some of us as Fr. Dan Berrigan flashing the peace sign low to his waist, handcuffed—sits as a reminder of King’s insistence not only on non-violence, but on civil disobedience. But we don’t talk about it much, except when I marvel at the popularity of youthful “ordinary radical” Shane Claiborne, author of Irresistable Revolution ($12.99—on sale here for $10.00.) He gets it as much as anybody, is being read by a young generation of evangelicals, and is, happily (and mysteriously, it seems to me) published by Zondervan. Who says God doesn’t work in mysterious ways?
Brother Martin almost had all that commitment to non-violent love and Sermon on the Mount guts stolen from him when he studied at a liberal Protestant seminary, but recovered a passion for the ways of Jesus by studying Gandhi. It is one of the great shames of my heritage—mainline Protestantism—that when it mattered most, we had little to aid this heroic giant of a Christian leader. Thank God (as Bonhoeffer had discovered earlier in the century when he worshipped at Abyssinian Baptist while studying at Union in 1931) for black gospel songs and the evangelical truth they carried.
Today, I thank God for those who most helped me in this area, a black roomate in college, who turned me on to the jazz-funk of War and traditional gospel, and affirmed my interest in James Cone. Thanks to Clarence Jordon, Tom Skinner and Bill Pannell, John Perkins and, more recently, Vincent Harding and Cornell West. And Vince, an Italian goofball who came to Christ through Young Life and lives like a combo Abbie Hoffman & Saint Francis, who stood alone for so many years, protesting Carnegie Mellon University’s war contracts and their refusal to honor Dr. King. Tonight, I listen to the vapid news stories and read the paper about all the services in his honor with politicos of all stripes saying they admire him, and wish I was doing something more true. I wish I could at least sell his books, so people know.
To wit: a book recommendation, at least. We here at Hearts & Minds stock more about King than most bookstores, and more about racial reconcilation and justice than perhaps any Christian bookstore anywhere. Nobody much notices, except the Klan, once, but we’ve got ’em. So call us sometime if you want an update on oldies or goodies.
This year, though, you must know that the third and final volume of one of the most significant historical works of our lifetime came out this year, At Canaan’s Edge: America in the King Years 1965-1968 by the renowned Taylor Branch (Simon & Schuster; $35.00 in hardback, just out this week in paperback; $20.00.) This completes the much-acclaimed triology that began with the Pulitzer Prize-winning Parting the Waters: America in the King Years 1954-1963 and Pillar of Fire: America in the King Years 1963-1965. Like the first two, Canaan’s Edge combines meticulous detail well told on a broad social canvas; passion and zest with a notable lack of sentimenality. Fair and serious and interesting. It weighs in at over 1000 pages. There may be easier ways to get some of this (Vincent Harding’s splendid Hope and History: Why We Must Share the Story of the Movement comes to mind) but nothing as significant, as thorough, as truly magisterial. This is what a good book is all about and will be something to treasure for the rest of your life.
From the dust jacket:

In At Canaan’s Edge, King and his movement stand at the zenith of America’s defining story, one decade into an epic struggle for the promises of democracy. Branch opens with the authorities’ violent suppression of a voting-rights march in Alabama on March 7, 1965. The quest to cross Selma’s Edmund Pettus Bridge engages the conscience of the world, strains the civil rights coalition, and embroils King in negotiations with all three branches of the U.S. government.
The marches from Selma coincide with the first landing of the large U.S. combat units in South Vietnam. The escalation of the war severs the cooperation of King and President Lyndon Johnson after a collaboration that culminated in the landmark 1965 Voting Rights Act.
After Selma, young pilgrims led by Stokely Carmichael take the movement into adjacent Lowndes County Alabama, where not a single member of the black majority had tried to vote in the twentieth century. Freedom workers are murdered, but sharecroppers learn to read, dare to vote, and build their own political party. Carmichael leaves in frustration to proclaim his famous black power doctrine, taking the local panther ballot symbol to become an icon of armed rebellion.
Also, after Selma, King takes nonviolence into Northern urban ghettoes…

One thought on “Magisterial At Canaan’s Edge”