I am sure that many of our readers read and re-read the classic C.S. Lewis essay in the book by the same name, The Weight of Glory.  The clever play on words in this Christianity Today interview with the Producer of the newly opened Narnia movie just took my breath away.  The Weight of Story.  I hope you know enough about Lewis to know that he would happily concur.

Here is an interview, which is very, very nice.  I found it fascinating, less about the story, I suppose, than the making of the movie.  One of the interesting lines was Doug Gresham’s observation that Prince Caspian is, as a book, not as good as The Lion, The Witch and the Wardrobe, but the movie ended up better!

There are, of course, oodles of books that have come out about the Caspian story, and many seem to be very good.  We read and reviewed many that came out for the fist Narnia movie three years ago, and some of the same authors have written on this one, now, too. Lyland Ryken, of course, deserves honorable mention, A Readers Guide to Caspian (IVP; $15.00) and Gene Vieth’s is great (The Soul of Prince Caspian published by Cook; $12.99.)   I think I am prepared to say that the best of the lot is Inside Prince Caspian: A Guide to Exploring the Return to Narnia which is written by Devin Brown, author of Inside Narnia, both published by Baker. It sells for $12.99 and is a very, very good guide, considered by smart guys like Eric Metaxas, as “wonderful and absolutely necessary.”   It studies Caspian in light of Lewis’ wide body of work, but doesn’t focus on the theology and religious meanings (the way Vieth does [very well] for instance.)  It does close literary work, and, believe it or not, is really, wonderfully enjoyable. (Here is a very thoughtful little review of the book which just might win you over, if you’re understandably reluctant to read a book about a Narnia story.)

Another new Lewis-related book is a real hoot.  One of the very best books of the batch two years ago on Narnia was the one on good and evil in the stories, written by the brillant Robert Verlarde, one which recently has been reissued with a new title, now called, The Heart Of Narnia: Wisdom Virtue and Life Lessons from the Classic Chronicles (Navpress; $12.99.)  But the brand new one that has to be mentioned is a novel-like story of a guy who alledgedly meets Lewis, and chats him up about a whole bunch of stuff.  It is imaginative and insightful, well-written and fun— Conversations With C. S. Lewis: Imaginative Discussions About Life, Christianity and God (IVP; $15.)  It’s no bus ride through hell, mind you, just a playful exploration of what it might be like to get to grill the Oxford don if he wandered into your town nowadays.

Speaking of imaginative work on Lewis, have you heard of the heavy weight scholarly study of Lewis and the symbolism of planets, secret code stuff uniting into coherence all of the Chronicles?  Planet Narnia: The Seven Heavens in the Imagination of C.S. Lewis by Michael Ward (Oxford University Press; $29.95)  may be the most important new work on Lewis in decades, and while I have no idea about any of it, serious reviewers have paid close attention to the close attention the author pays to cryptic hints. (Stunningly rave reviews from guys like Walter Hooper!)   Read some reviews, at least, or form a study club, if you can find anybody who knows the Chronicles of Narnia well enough to evaulate it all.  Pretty interesting, eh?

But the movie, yes the movie.  Here is the link to the Harper Prince Caspian website, with their nice motto, “Read it 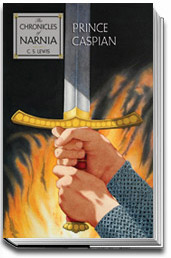 before you see it.”  Nice trivia games and other good stuff, including trailers for the film and such.  Spread the word.  Read the books, or books about the books.

Here, if you haven’t seen it, is yet another cover;  we have several editions, trade paper size, or rack (smaller, trim) sized ones, some with full color art, colorized work of Bayles, some with the original old black and white drawings, some older covers, and these new vivid ones, done in watercolor.  Happily, no one has messed with the text.

One thought on “The Weight of Story: Prince Caspian”