I’ve written before about the adult ed class I’m doing at my church on citizenship and faith, Christians politics and such.  I’ve been re-reading parts of old favorites–Paul Marshal’s God and the Constitution is brilliant, and David T. Koyzis Political Visions and Illusions is (as the subtitle puts it): A Survey & Critique of Contemporary Ideologies and is therefore exceptionally important for those serious about such concerns. We are glad for these thoughtful resources that get beyond the typical news reports or the knee-jerk faith-based partisanship from the left or the right. Jesus for President by Shane Claiborne & Chris Haw, as we’ve said before, is as hip and radical as they come, and I love it, and recommend it, even if I find the anarchy/resistance bit less than adequate.  Ahh, I remember doing Bible studies with Berrigan-esque folks years ago, perplexed at how easily they insisted that Revelation 13 (the state as beast) trumps Romans 13 (the state as servant);  it is never that simple, though, is it?  In God’s good but fallen world, it seems to me, we must live in the tension that insists that institutions are fallen, but can (and shall be) redeemed in Christ, meaning we must protest, sometimes, and be patiently in for the long haul, sometimes. As John Stott puts it, we are called to be “conservative radicals.” (That is, there are a few key core truths which we must conserve and, in light of those—the Lordship of Jesus revealed through an authoritative Bible—everything else can be radically critiqued.)

And so in our class we’ve dashed through stuff about the civitas, how we are to seek the public good, honoring in civil ways, the pluralism of our culture.  Os Guinness’ Case for Civility, as I’ve said before, is a rich, thoughtful, deep guide to forging an alternative between the “naked public square” and the “sacred public square.”  We cannot abide a Taliban-like theocracy, of course, but the alternative is not an implausible removal of religious convictions from public life.  Dr. Guinness helps us get at this quandary and it is very, very helpful. See a bit about it here.

After a few weeks on the Biblical basis for justice, we’ve been reflecting now on civic life, on everything from Sidewalks in the Kingdom (a book we’ve often promoted, a new urbanism study written by a Presbyterian pastor, Eric Jacobsen who is influenced by the brilliant and fiesty work of James Howard Kunstler;  you can see Jacobsen’s website here. which has some great resources and excerpts of the book.) We’ve mentioned Robert Putnam’s Bowling Alone, which reminds us of the need to think hard about social capitol and the demise of mediating structures and civil society. (See Bowling Alone’s website, here.)  Not all public life and civic engagement is about government per se; a good new “third place” in a town may be just what is most needed to foster a sense of commitment to the community, and to create energy for civic engagement.  (Of course, zoning laws come into play, so there ya go, back to political issues.)  Before we ask what the task of the state is, we should be aware of the broader civic institutions, voluntary associations, clubs, churches and other such groups that we too often don’t take very seriously.  At least that is Putnam’s thesis. 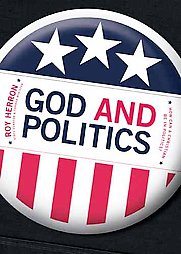 In my reading this last week, I remembered a very, very small book that I loved a few years back, realizing that it is now happily reissued in a slightly larger size, but still small and handy.  It is fun, funny, moving and clear-headed as they come.  God and Politics: How Can a Christian Be in Politics (Tyndale; $7.99) is written by the delightful Christian gentleman, Roy Herron (a State Senator from Tennessee.) I read it almost in one sitting, wiping tears from my eyes at one point, and wondering how in the world I can sell a few of these lovely, little, very inspiring, basic-level, but spot-on introductions to balanced and thoughtful Christian statecraft.  This is written by a sharp guy, a former minister, a Democrat from TN.  He draws on his experience as a state senator and promotes a humble, kind, and just sense of the common good.  If you know anyone who needs a nice, evangelically-minded and very interesting quick intro to this whole field, this little book can’t be beat.

I spent a bit of time in my Sunday school lecture explaining why “I’m neither left nor right” and the conundrum of those like, for instance, the consistent life ethic folks of the Catholic social teaching movement that is (to be simplistic) pro poor and pro life;  ahhhh, they just don’t fit the typical bi-polar continuum of the American reds and blues.  To be against the abuse of the earth and to be in favor of traditional sexual ethics, again, is hardly liberal or conservative.  Ron Sider’s Evangelicals for Social Action, and to some extent Sojourners and Campolo’s Red Letter Christians movement (and his new book of that name) are examples of this “third way” thinking that isn’t easily pegged in terms of typical American ideology.  The neo-Calvinists—I’ve mentioned the Stephen Monsma book and DVD in the last post—are similiarly not quite on the typical left-to-right sliding scale.  A peculiar people, indeed.

Yes, I want to be nonpartisan.  Still,  I came home and started reading a “hard to put down” book I’ve been meaning to get to, and it is as partisan as can be.  It is mad as a wet hen and it is such a thrilling read, such a sad and funny expose of how American blue collar redneck Southern working class folk think and live, written by a “class warfare” advocate whose good hearted care for his own fundamentalist/blue-collar roots is palpable.

With Jesus: Dispatches From America’s Class War by Joe Bageant (Three River Press; $13.95.)  His explorations from the local bar and grill in his hometown of Winchester VA, remind me a bit of one of my favorite writers, Bill Kauffman (Muckdog Gazette and Look Homeward America) without the detailed history, but sharing his antipathy for big corporations that bamboozle the ordinary folks of small towns.  He knows his town well, and has done some stunning organizing around slumlords and tenets rights, fighting shady cops and Republican commissioners and anti-union Chamber of Commerce leaders, even while he calls them his neighbors, and knows everybody’s business (as they know his. This is a smallish town, remember, one with, apparently  where a lot of folks are related to alot of other folks.)  I was disappointed in the church he visited, but I suppose it was typical; it was poignant because the visit was to his brother’s Baptist church.  You’ve got to read the chapter which told of the Rubbermaid factory (and the ever present threat of plants moving to Mexico.)  This is one down-home, fired up, sociological treatise that is a real as the busted up cars in the yard, the karaoke bar where diabetic women sing Patsy Cline, the gun-lovin’ residents of the local mobile h
ome park get born again, and  everybody’s huge credit card debt doesn’t keep them from kicking back with a few cold ones when times get tough. Despite the lack of health care, poor wages they remain largely a committed Republican voting block.

Forget the bestseller from a few years back, What’s the Matter with Kansas? and pick up this gonzo journalist gone-working class, a guy whose writing has been said to make Michael Moore seem tame.  Look, you may not be wanting all the feisty liberal talk here (let alone the cussing), and you may not like his anger at the neo-con elitists, and you may not appreciate his unabashed pro-union, anti-business bias.  But this is one heckuva bias, and it colors every bit of his muck-racking journalism with such a passion for the oppressed and such a righteous anger against the injustices foisted upon these good and often very hard-working folk, that it makes for a convicting, exhilarating, raging read.  He’s writing about people I know, and you probably do to. Folks who have never stepped foot in a Starbucks, and wouldn’t know an emergent cohort if it bit ’em on the butt.  Despite all the progressive’s earnest talk about the poor and the little guy, even Obama’s moving speeches about single moms and the working poor, most progressives frankly don’t know, let alone appreciate rural or small town folk.  Bageant does. He has been living as a proud  white Southerner on the lower end of the middle class for a while, and has been blasting away about it at his controversial blog (www.JoeBageant.com) for years.

I’m glad that I picked up this wild Deer Hunting With Jesus today, and it will remind me that even as I call for a “third way” and have great ambivalence about the simplistic proposals from the Democrats and the Republicans alike, there are tons of folks out there beside the urban underclass, who are really hurting, and we need to make sure they are not left behind.  Not all corporations are corrupt—I have never thought that—but there are corporations, large and small, who rip people off, and there is collusion allowing injustice to go unopposed.  This is one of those books that can light a fire, giving us real names and places and situations, real stories of a rough part of town, like a John Gorka song, reminding us of how a good chunk of our fellow citizens live. And it is wonderfully self-aware, loaded with the irony that Bageant gets, that he is a liberal and his friends and neighbors hate liberals.  They listen to Rush.  They know how they see the world. Yet he is there, laughing and crying and writing it all down, probably listening to Bruce Springsteen and maybe some Johnny Cash–and surely the hometown gal, Patsy Cline— along the way.  What a story.

3 thoughts on “God and Politics & Deer Hunting With Jesus”