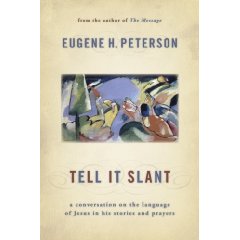 This just in: Eugene Peterson’s long awaited fourth volume in his classy (and soon to be classic) projected five volume magnum opus series of spiritual theology is now available. (The first one was called Christ Plays in Ten Thousand Places and is now available in paperback.) The new one is Tell It Slant:  Conversation on the Language of Jesus in His Stories and Prayers (Eerdmans; $24.00.)  Those who have heard his Tell It Slant recorded lectures from his days back at Regent in BC know the eloquence and passion he has for this topic.  Indeed, one of the things Peterson is most known for is his love for language, his insistence that we pay attention to the details of the Biblical text (his love for nuance, syntax, and grammar shows up in The Message in ways that are too often underappreciated, I think.)  He has often told the stories of how his own love for poetry and novels–from James Joyce to Cormac McCarthy and Reynolds Price–and Greek and Hebrew (think of that chapter in Subversive Spirituality called Kittel Among the Coffee Cups) have shaped his love for the Word.  And how our human, made-in-God’s-image, language-using, story-telling, meaning-making, down-to-Earth nature leads us to naturally enter into story. So, a conversation about language is quintessential Peterson, and his love for the person and work and language and ways of Jesus, is just what we’ve come to expect, to hunger for, from his pen.  Believe it or not, there is a very intelligent, half-hour YouTube interview with Eugene, and you can watch him there.  It is a tremendous treat, with him talking about novels, authors (like Wendell Berry), the work of the pastor, missing the chance to be with Bono, The Message and Bible translation, reading well, God and other glorious themes that hover around his ongoing work.

In the third volume in this series, last years profound (that is, to be read slowly) The Jesus Way, Peterson ruminates on the ways of Jesus, the Messiah way of being in the world, even the Christ-like way of leadership.  He rightfully worries that we don’t do “God’s work in God’s way” but rather, adopt the world’s assumptions and images and metaphors and strategies and policies and techniques, doing Christ’s work in wrong ways (or, worse, doing our own darn stuff and saying it is God’s stuff.)  Ways and means, vision and lifestyle, word and deed, worldview and way of life:  these are one in the integrated Christian way, and any of pastor Peterson’s books help us get that in our bones.

In Tell It Slant–a beloved line from an Emily Dickinson poem–Eugene does just that, brings a somewhat new angle of vision to the ways in which Jesus Himself taught, spoke, prayed.  He has “lived with”  and pondered these stories, these prayers, and, as Arthur Paul Boers says, this book is as “winsome and wise as ever” and that “this volume is among…his very best.”  Another reviewer says “If books were priced according to the linguistic care with which their sentences were assembled, this volume would be priceless.”

And listen further to Peter Marty (of Grace Matters Radio): (Peterson) “strikes forcefully at theological abstraction and sentimental godtalk.”  I am not sure if this necessarily means he offers critique of and resistance to the gibberish of the theological left and the overly pious right (or is it the theologism of the evangelical right and the vapid spirituality of the ecumenical left?)  Either way, his doctrine and devotion, his conviction and practice, his textual insight and lived wisdom, his submission to text and presence, helps us all—evangelical, mainline, Catholic, emergent or mystic or dogmatic or whatever—to grapple with solid faith and the resulting common-sense, yet surprising, whole-life, counter-cultural discipleship in the way of Jesus.

Tell It Slant: Conversations… is dedicated to his grandchildren, who keep him alive to wonder and joy.  As Peterson ages, he has not lost his ability to think deeply and communicate clearly, to present the gospel in penetrating and powerful ways, yet he relishes the perspective of these little ones.  And, also,  as always, he is dipping his pen in ancient pools, suggesting as part of the conversation, ways to deepen our love for language, imagination, text and story, by citing our best writers and thinkers.  What a splendid work this appears to be.  We are pleased to commend it to you as one which will surely be on many “best of the year” lists.    See our special price listed below.

There are study guides available for each of these volumes, as well.  They sell for $6.00 and are very well done (although the new one has not yet been released.)

The last line of the Dickinson stanza from which Peterson gleaned this title includes the prhase “the truth must dazzle gradually.”  Exactly.  As the Bible commands, and as Peterson’s second book in the set puts it, “eat this book.”  Take your time, it will be worth it.