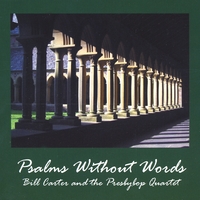 As I was reviewing two new CDs in my last post, I really wanted to tell you about another, a jazz album called Psalms Without Words by Bill Carter and the Presbybop Quartet. We’ve had it since it released earlier in 2009; Bill and his band are playing at First Presbyterian Church here in York this Sunday night so I’m excited to write about it now.  Bill is a friend and has been doing sacred jazz for quite some time.  Some local Hearts & Minds friends will come out for the concert, I’m sure, as they know his jazz recordings that we play in the shop.  Others may find the idea intriguing: sacred jazz?

There is a movement these days of sacred music being done in a jazz format, which is (but only slightly) different than just Christian musicians doing good jazz work, their faith inspiring them to play in the genre.  Sacred jazz, it seems to me, is usually solid jazz playing that is working off of a tradition of sacred music.  That is, they do hymns, maybe, with large flights of fancy and improvisation in the middle, riffs and arrangements that are playful, intense, and intending to be worshipful.  Or they are doing songs that are pushing off of themes of worship, crafted to be used liturgically, even. Those who are more involved in this than I can parse the differences between Christians in jazz and the distinctions of sacred jazz… Carter thinks and writes about and leads worship, though, and is a theologian himself, so his jazz and blues experiments with his stellar band have the whiff of worship, seem more intentionally sacred than more typical jazz.

For instance, Deanna Witkowski is a sacred jazz pianist that we admire. We carry her

From This Place CD which includes a song suite for evening mass: kyrie, gloria, sanctus, agnus dei.  She riffs on some tender hymns, too (“O, the Deep, Deep Love” “I Heart the Voice of Jesus Say” and “Take My Life and Let It Be.”) A few songs are inspired by Biblical texts (“Song of Simeon.”)  For nearly an hour one can be transported by a world of soprano and tenor sax, acoustic and electric basses–played by John Patitucci–a hot drummer, and some fine, fine vocalists.  Deanna is the heart, though, and the core of this project with her light but passionate piano work.  Check out her website here.  (She has links where you can watch her perform at the Kennedy Center, for instance.)  It seems a clear example of what some call sacred jazz.

Bill Carter–please come out to FPC at 7:00 this Sunday night if you can—is a Presbyterian preacher, an author, a trustee at Princeton Theological Seminary and a working pastor.  He’s a sharp guy, thoughtful, intentional about his work and life, and (if I can say it about a jazzman) a lot of fun to be with.  He has immersed himself in the genre for decades, and can talk John Coltrane and Miles Davis and Charlie Parker.  He’s a piano player, so he’s hip on Thelonious Monk, Oscar Peterson, Keith Jarrett and other greats. (Here is a cool little list of 10 pianists who revolutionized jazz. If you’re like me, and only dabble in jazz a bit, you’ll learn some important names.)  Carter knows this stuff, so don’t let his boyish looks and happy demeanor fool you; he’s got this in his very musical bones.

I also know that the Revered Carter has been influenced by a legend of modern jazz, a

breath-taking jazz pianist and composer of a seminal work of sacred jazz, Dave Brubeck.  Brubeck (I gather) doesn’t endorse a lot of younger jazz musicians, doesn’t blurb albums (the way some authors do books.) But there it is, one one of Bill’s earlier recordings, a rave endorsement by Brubeck himself.  Not too shabby.

Psalms Without Words is Presbybop’s latest, a double album, and Bill told me of his plans for it a few years ago.  He did a sabbatical, studying and reflecting on the Psalms, the use of Psalters, and how prayerful readings of the Psalms can enrich one’s

devotional life (and our communal worship, an insight many mainline Protestants are increasingly paying attention to. (See, for instance, John Witvliet’s The Biblical Psalms in Christian Worship or Calvin Seerveld’s Voicing God’s Psalms.)  He actually went to Scotland and Ireland, visiting places like Iona, who gave quiet space for rest and retreat, for meditation and study and experience of the sacred cadences of these ancient texts.  He reported back along the way via an engaging blog, and upon returning home, dug into the process of writing a set of instrumental songs inspired by the Biblical Psalms. The brief liner notes around each song are fascinating themselves.

Message of the Psalms (Augsburg; $20.00) Bill is aware that nearly a third of the Psalter is giving voice to pain and struggle and doubt: they are the psalms of lament.  So, his generally snazzy recording, though, has these interesting titles: disc A is called Praises and Laments and disc B is called Laments and Praises.  An earlier album, featuring singer Warren Cooper, Welcome Home, has a strong emphasis on old spirituals and the blues, conjuring some poignant longing, giving voice to our sadnesses. The lovely song that became the title track was once performed right after a Brueggemann sermon, who encouraged him to record it. Warren, by the way, hails from York, and will be sitting in with Presbybop at the FPC show Sunday night.

There is a DVD that accompanies the psalms project called Listening for Selah–Psalms Without Words Live that you may want to order.  Learn all about it (or get sheet music and other Presbybop stuff) at www.presbybop.com.   It’s a visit that is well worth it!

Bill is clearly the leader of this band, but his guys are hot, very, very talented (and in some cases, much more experienced as jazz players and performers than he is; he’s a working pastor, of course, so this jazz performance calling is a bit of a
side-gig for him.)  He’s got a great sax and clarinet player, a trumpet/French horn guy, and of course bass and drums.  It’s a great combo, very authentically bebop with hot swing and a bit of blues and a touch of modern experimental stuff.  It is not so “out there” that only the freakiest jazz fans will get it although it is not “pretend” jazz like you sometimes see in Christian bookstores (old hymns just done in a muzak way with a cheesy sax.)  No, no: this is well-done, vital, jazz, the real deal, informed by and in the tradition of the greats, greats such as Dave Brubeck.

Here’s a little blog incentive, a special deal for fans of BookNotes.  If you buy Psalms Without Words (usually $20, but at a 10% discount only $18) we will throw in a copy of Message of the Psalms by Walter Brueggemann (usually $20.00) for half price.  I know Bill has used this classic volume in workshops he’s done, so it might prove fruitful as you enjoy his creative compositions inspired by his years immersed in the Psalms. Special book offer expires in one week, March 20, 2010.

If you want Deanna Witkowski’s From This Place, (on the Tilapia label, usually $16.95)
we can sell that at 10% off as well. Selah!
BLOG SPECIAL
Psalms Without Words
Bill Carter and the Presbybop Quartet
regularly $20.00
10% off
now $18.00

AND
The Message of the Psalms
Walter Brueggemann
regularly $20.00
HALF PRICE
now $10.00