After reading a Newsweek article about religion (or the lack thereof) at Harvard I wrote a long-winded post for our March monthly column.  I cited books like The Myth of Religious Neutrality (Roy Clouser) and a few resources on faith, science, postmodernism, reason and such.  I hope you visit that column as we are passionate about offering resources for those who need to engage this conversation about truth and pluralism and secularization and witnessing with credibility amidst the new atheism and culture wars.

Two things came to mind, though, as soon as I hit the send button.

In any debate about worldviews, Christians know that Jesus says that love wins.  That we are to always “speak the truth in love” and that, supremely, all will know who Jesus is “if you love one another.”  As Francis Schaeffer, a cultural critic and pastor to the counter culture of the 60s, himself quite a terse speaking defender of the truth claims of the gospel, put it, love is the “final apologetic.”  His book The Mark of a Christian (Inter-Varsity Press; $6.00) is still quite a little gem.  Do you know it?  It is one of Schaeffer’s most enduring small essays.

The book I most wanted to add to that list, though, is a thoroughly contemporary update of that sweet thesis, and is called Love: The Ultimate Apologetic: The Heart of Christian Witness by Art Lindsley (IVP; $15.00.)   It is a truly great book.

Art, a staff teacher in the Washington, DC-area C.S. Lewis Institute, has done extraordinary work on apologetics.  A chapter from his True Truth: Defending Absolute Truth in a Relativistic World–a book where he shows the difference between absolutes and absolutism-—is excerpted in the prestigious new collection Belief: Readings on the Reason for Faith by Francis Collins (HarperOne; $19.99.) Art’s fabulous book called C.S. Lewis’ Case for Christ explores the journey of thought that the famous Oxford atheist undertook to finally conclude and commit to the truth of Christianity.  The subtitle shows Art’s good insight into the multi-dimensional avenues Mr. Lewis explored and commends to us all: “insights from Reason, Imagination and Faith.”  Lewis was a rigorous thinker, but no rationalist.  Those struck by the harsh rationalism cited in the Harvard Newsweek story, like those by the popular and pleasant–but reductionistic— Steven Pinker, might want to consider Lindsley on Lewis.

Still, always and everywhere, love is the answer.  Which is why after years of a career teaching and writing and doing apologetics, promoting “true truth” alongside our great communicators such as Ravi Zacharias, Lindsley knew he also had to write about love.  There isn’t much on this topic, and few books are devoted to the apologetic impact of a generous and kind spirit.  Few books tell you how to be more loving amidst intellectual sparring.

As I was suggesting titles about reason and faith and truth and science and pluralism and worldviews I was remiss not to add this.  Love: The Ultimate Apologetic is very highly recommended.

There is another big mystery, another significant, large claim about this business of what constitute truth.  It is a claim that some are showing, a radical but serious idea: that truth is known in community. This is the stunning and audacious (and, some are saying, particularly Reformed) insight of John F. Franke in his Manifold Witness: The Plurality of Truth (Abingdon; $18.00.) 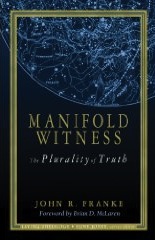 You may know that the emergent village has a series that is edited by Tony Jones, called the “living theology” series.  This is a recent one (the brand new one is by Andrew Root.  More on that later.)  Brian McLaren has a lovely forward, showing four reasons why this book is so enjoyable and interesting and well worth your investment.

Brian notes that, firstly, it is beautifully written.  Although a complex study of epistemology, it isn’t laden with technical jargon.  Secondly, it is wonderful to see a white male theologian so sensitive to the concerns of non-white, minority voices.  Thirdly, Brian (as has Scot McKnight) notes just how darn Reformed this idea is.  Not that it restates dogma as frozen in the past, but in that it exemplifies the Reformation ideal of the church always reforming. Yes, we always need to be growing, exploring, re-stating and re-formulating.  Finally, there is the actual claim of the book: truth is plural.

I can’t explain it all here, but I agree with Brian that this is a wondrous work, a lovely book, well written, nicely designed, and clearly argued.  It illustrates, as Lamin Sanneh puts it, that “faith is embodied, that theology is rooted in practice and experience, and that the gospel shapes and is shaped by culture.”  It is a work that will be of interest of those who have been reading Desiring the Kingdom by James K.A. Smith, which also studies the interface of  theology and practice, worldview and way of life, convictions and interpretation.

Manifold voices are a good thing.  That’s a good thing, too, because, like it or not, that is how the Bible is written, and that is the nature of our world, especially as we in the West admit to the global nature of the Christian community.  I ended my long review the other day with a reminder of Os Guinness’ Case for Civility, suggesting that it is urgent that we make space for ideological diversity (something the fundamentalists on the right and left don’t seem to desire) or we will be torn asunder as a culture.  Maybe alongside Os’ passionate call for social structures informed by the first amendment, we should remind ourselves of the deeply communal nature of the Christian tradition, the multi-dimensional ways of knowing.  Kudos to Franke and to the “living theology” series for this intriguing, graceful, provocative meditation, Manifold Witness: The Plurality of Truth.  I hope many consider it, read it and talk about it.  We’re offering it on sale, below.

BLOG SPECIAL
Love: The Ultimate Apologetic
and/or
Manifold Witness: The Plurality of Truth
Buy one 10% off
Buy two 20% off