After the last post’s mention of the Paul Marshall books and his expertise on a balanced and informed view of Islamic extremists, I thought I’d list a few books that those serious about this crisis of our times might want to know about.  Two are a bit demanding, two are more readable and inspiring.  All are recent.

By the way, those of us who are followers of Christ have to always keep in mind–sorry to preach–that despite however unjust and grossly dangerous our enemies may be, we are called to exhibit a Christ-like demeanor, always protecting the dignity of all who are made in the image of God, with the goal of seeking reconciliation, not necessarily victory.  (Gandhi was right, I think, that a defeated enemies is not nearly as good as a converted friend.) Just war theorists and pacifists alike who are serious Christians agree that we must frame our examinations of these current affairs by the coming reign of the One who was slain.  We are to bring great glory to Him, and we know how He did that.  Through suffering love, the sort of non-violent grace that Peter says is “an example for us to follow.”

I don’t know if any of these authors share this ethic of Biblical peacemaking in the way of the Christ, but they are nonetheless vital resources for contemporary living.  We recommend them.

Faith and Power: Religion and Politics in the Middle East  Bernard Lewis (Oxford University Press) $24.95  Agree fully with him or not, there is little doubt that he is one of the top world-wide scholars of the Arab world.  For years he has researched, written, observed and guided the world’s leaders into a deeper understanding of the conflicts of our age.  “Lewis has done us all–Muslim and non-Muslim alike–a remarkable service”, says Paul Kennedy in his New York Times review of the classic What Went Wrong?  In this collection released just this week, the Emeritus of Near Eastern Studies at Princeton gives us previously unpublished pieces, chapters formerly published in obscure academic journals, and a few first released in foreign languages.  A long introduction frames the collection.  Very important. Here is a good summary of some of his views, an overview of some of the criticisms waged against him and a link to a transcript of his debates with Noam Chomsky.

Flight of the Intellectuals  Paul Berman (Melville House) $26.00 Mr. Berman’s post 9-11 book Terror and Liberalism was one of the most stimulating and important I read in those hard years. Considered one of the most significant books on the topic, it was widely reviewed. He admitted that as a proud and classic liberal intellectual and activist (a framer of what was once called the New Left and a true man of letters), he resisted abuses of American power, worked for international justice, presumed that war was a front for crass U.S. power and investigated how imperial interests too often propped up unjust regimes, and failed to stand for human rights.  Oddly, however, in his view, his liberal comrades failed to see or understand the horrific human rights abuses and despotism found in radical Islam.  From their treatment of homosexuals and women to their foreign policies of terror, their hatred for modernity and reason, extreme Islamists stood against everything liberals stood for.  So why the failure to speak a clear “no” to the repression and totalitarian tendencies of some of the more unsavory parties within radical Islam, such as the Muslim Brotherhood?  Why the failure to denounce the rabid anti-Semitism? Why blame the West?  Terror and Liberalism brilliantly exposed the inconsistencies and blinds spots on the left and while I didn’t agree with all of his conclusions, it was a very, very important work.

Here, in this very important new work, Berman continues to skewer the failures of the left, asking tough questions about the integrity of the American intellectual tradition.  Perhaps you saw the much-discussed piece about Oxford professor (and near celebrity) Tariq Ramadan in The New Republic from which this book grew.  It is respectfully dedicated to two great liberal journalists and intellectuals, Marty Peretz and Leon Wieseltier.  These are top shelf intellectual reflections, which I commend for the sheer joy of seeing a master essayist at work, to spend time with the writings of a public intellectual, who, sadly, may be more correct than we realize.

The Imam’s Daughter: My Desperate Flight to Freedom Hannah Shah (Zondervan) $19.99   There are several great books that illuminate conservative Muslim culture, that tell the fascinating tales of what it is like living in places where fundamentalist Islam is the primary culture. In this instance, Hannah Shah (not her real name)  lived in the strict Pakistani Muslim sub-culture of  Northern England.  Sexually violated and abused, with a submissive mother, she fled to freedom at age 16 (to avoid an arranged marriage), married for love, and writes poignantly about trauma and freedom.  Some of the story is harrowing, even after her escape as there is the need to flee from her families efforts to execute her in an “honor killing” (since she converted to Christian faith.)  A moving, powerful story from a woman who Rob Bells says has “Jesus-sized courage.”    See more about her at www.hannahshah.com. 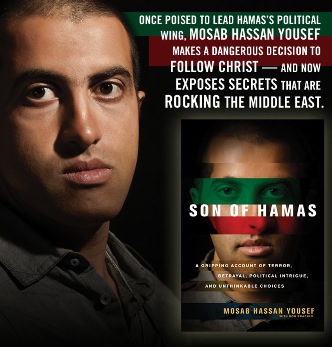 Son of Hamas Mosab Hassan Yousef (SaltRiver) $26.99  Before the age of 21 Mosab Yousef had seen things that are truly horrible—-Palestinian poverty, human rights abuses, torture, even.  He observed historic backroom arrangements with some of the leading figures in the Arab world, participated in the Intifada, was held captive deep inside an Israeli prison.  He eventually gained the trust of various factions within Hamas, and had access to extraordinary secrets that only a few people in the world really know.  He is the son of Sheikh Hassan Yousef, a founding leader of Hamas, internationally recognized as a terrorist organization and responsible for countless suicide bombings against Israel.

It isn’t every day we get to read the account of a potential double-agent, a man interested in jihad, who has slowly come out of it.  Here is a good interview with him, oddly, in GQ (sorry.) As they say in the interview, this is not your typical Christian book.  By the way, his father has now disowned him, and he is under threat.  He says he is not afraid, and still loves his father, and stands with his people.

The dust jacket reports that “aft
er a chance encounter with a British tourist, he began a soul-searching journey that lead him to jeopardize his family and threatened his life.  He has since embraced the teachings of jesus and sought political asylum in America.”
Ron Brackin helped him write this and he is a man with extensive and dramatic investigative journalistic experiences (from the Al Aqsa Intifada to Baghdad, from southern Sudan to time in Gaza.)

Stones Into Schools: Promoting Peace with Books, Not Bombs, in Afghanistan and Pakistan Greg Mortenson (Viking) $26.95  Even the most politically jaded warmed to the great adventure and beautiful humanitarianism of Three Cups of Tea. We are glad it has even been made into a children’s picture book called Listen to the Wind.   Here, he is back, with a forward by Khaled Hosseini, affirming the joy of books, the beauty of learning, the need for cross-cultural relationships, and how his tenacious work to help girls in remote mountainous villages may be the very best way to resist terrorism.