Thanks to Shepherd of the Hills (UCC) and Morningstar Fellowship (Assembly of God) in Bechtelsville (near Pottstown, PA) who Friday and Saturday co-sponsored an event with my old pal Paul Marshall for an exceptional set of lectures on radical Islam, the religious dimensions of global terrorism, how the media does and doesn’t report on that well, and what the persecuted church in the third world is going through.  Paul just got back from a very high level meeting in Europe with several Prime Ministers, Duchesses, Baronesses, and Dukes and famous folks from Tony Blair to an official from the Vatican.  From there, despite jet lag, to a couple of small town churches here in Pennsylvania.  It is to Dr. Marshall’s credit that he lectures amongst the world’s elites, and he worships with common folk in Sudan, Pakistan, Indonesia, or Nigeria.  He has seen the worst sort of human rights abuses (documented in the chilling book, now out of print, Their Blood Cries Out) and that may be what motivates him to speak so often, so passionately.

Paul, as you may know, wrote one of my all time favorite books, a call to live faithfully in the 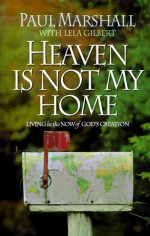 ordinary, with good chapters on a Christian perspective on work, play, education, art, politics, technology, and the like.  We are embodied, made for this creation, and therefore can worship God gladly in the ways in which we live into our daily practices, from shopping to voting, playing, to resting, doing our jobs and thinking about evangelism.  Heaven is Not My Home: Living in the Now of God’s Creation (Nelson; $15.95) preceded by a decade Surprised By Hope (N.T. Wright) or Randy Alcorn’s Heaven, each which also celebrates the “this world being restored/creation-regained” vision, and emerges from the worldview stuff that we are so fond of.  That Os Guinness, while writing his magnificent book The Call, encouraged Paul to write this—an easy to read, wide-as-life, guide to discipleship—reminds me of how excellent and vital it is.  The folks at the two churches were thrilled to hear about this— intuiting, I think, that if we are to care about the big stuff of human rights and be faithful in this age of terror, we must first get it into our minds that God cares about this world.  Real life matters, and we do live “in the now of God’s creation.”  We are meant to be here.  You know that “for God so loved the world” stuff?  It’s really, really true! 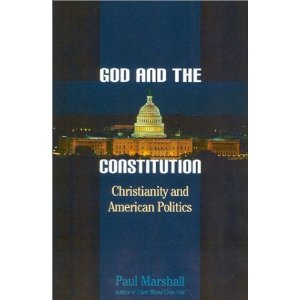 Paul also wrote what I take to be the best book on politics from a distinctively Christian view, God and the Constitution: Christianity and American Politics (Rowman and Littlefield; $27.95.)  It isn’t partisan, and, to be honest, I believe the title is mis-leading, as it isn’t about the constitution, as such.  It is more generally about faith and civic life, the Biblical framework for governance, what the task of the state is and isn’t, and how faith informs and funds a vision of pluralism and justice.  It isn’t academic, really, but it is quite substantive.  If you are wishing to get beyond the fairly predictable examples of the “Christian right” and the “social action left” this provides a thoughtful foundation… 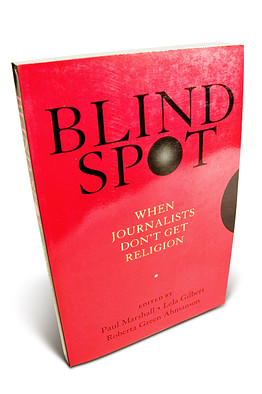 Marshall literally rolled up his sleeves for the jam-packed lecture of examples of how the leading newspapers and news sources in the Western world don’t seem to get how religion influences major world events.  From the religiously-motivated Al Quada, for instance, to the ways in which American citizens vote, the press seriously and routinely make significant errors and omissions.  It is, as the book he co-edited puts it, a “blind spot.” (Blind Spot: When Journalists Don’t Get Religion, [Oxford University Press; $19.95.]) It is a big seller right now for Oxford, and, although it is written to the journalistic community, firstly, it is great reading for anyone serious about the nature of religion in the modern world, and the secular “tone deafness” that is prevalent, especially among cultural leaders.)  Marshall’s examples—over and over—of how, for instance, radical Islamist terrorists kill Christians in developing countries (say, Pakistani Catholics or Christians in Bali, or believers in certain states of Nigeria) and the typical Western press (The New York Times, say, or the Associated Press, or the major papers in France or England) says the terrorist actions were against “Westerners.”  Of course the dead Pakistanis or Nigerians aren’t Westerners, and they were targeted because of their faith.  This misunderstanding of religion, even where it seems so evident, is an example of a perplexing matter in how we get our information and how we see God’s work in the world.  (His lecture, I might add, was not about media bias, about whether Fox news or CNBC is more honest or balanced.  It was about this blind spot which is evident in most major media outlets.)  Other great chapters in the book are by other faith-based media scholars (not all Christians, by the way) and a great piece by the Orthodox  syndicated columnist Terry Mattingly, who I admire a lot.  A Jewish scholar says on the back that it isn’t always when he “let’s out a whoop of joy” in reading a book, but he did with this.

Well, again, it is great to see one who has this deeply spiritual and robust faith who sees his calling as mostly to the secular world, scholars, activists, and think-tank wonks.  Praise God with me for Paul’s good work at the Hudson Institute, for congregations who bring in authors (and booksellers) allowing us to do our thing.  Maybe through this learning and thinking together, we will not only be better prepared to help “repair the world” but to work together across denominational lines.  It was worth the trip to Bechtelsville just to see two very different congregations sharing in a joint project.  An Assembly of God mega-church with a very cool contemporary worship space and coffee shop and a UCC parish (with wooden beams and stained glass in their lovely circa-60s Protestant sanctuary) bringing in a human rights activist who is Episcopalian, who had just gotten back from Europe— with a Presbyterian bookseller from Dallastown.  It was a good week-end.  Thanks for caring.