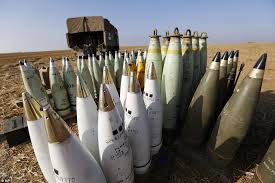 The outbreak of war between the Palestinians and Israel again these last days has been upsetting for all decent folks, and has caused many of us here in the States to discuss and debate the relative merits of the claims made by each side, highlighting the different injustices, the different fears, the different geo-politics, and trying to understand the leading ideological and religious motivations. It is sad to say that this outbreak is nothing new, and the history of this beautiful and violent part of the world is nothing if not complicated.

I spent a bit of time involved in several on-line conversations about it all. Not only did I get several different views, but I was reminded —  this time, painfully for me — how deep the differences of perception are. 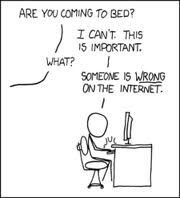 One man, from a Mediterranean country, would not allow me to blame the Palestinians for anything; it was all the Zionist’s fault. Another friend of Jewish descent had an equally one-sided view. Neither would budge and although both were followers of Jesus, they seemed utterly disinterested as I tried to interject into the conversation His holy call to peacemaking. Like many these days, it seemed as if their faith didn’t equip them for even having open minds or tender hearts, let alone unconventional solutions: their minds were made up, and the other guys were to blame.
In these kinds of discussions, my call for a third way, for being God’s agents of transformation by maybe “thinking outside of the box” or using prudent, faith-based insights about wisdom and reconciliation, are hindered; sometimes people just don’t care about Biblical visions and proposals, but sometimes, although I can usually preach that stuff in a way that sounds good in theory, I sometimes just don’t know all the facts.  And in the Israeli-Palestinian conflicts, the facts are, as I’ve said, complicated.
Not only was the need for having a reliable source for basic data pressed upon me again this week as I listened to the news of the death of youths, then the rocket attacks, and then found myself gaping at Christians who seemed not to care about nuance and fairness and balance, but I’ve found myself talking a bit about the needs for a just solution in this Middle Eastern trouble-spot as my own denomination’s recent policies were in the news. The PC(USA) passed resolutions to selectively financially divest from three US-based companies who were involved in building equipment used by Israel in what our denominational voters concluded were unjust and inappropriate ways. Many didn’t understand or agree with this vote, so the issue has come up. Other Christians, Jewish activists, and even non-religious organizations have either applauded or protested our vote. (You can read about the history of this evolving discussion here, or a report about the recent vote here, if you’d like.) A few leaders in our tribe even posted an open letter (signed by a few friends of mine) which called for social justice but also reminded those who care about justice for the Palestinians not to overstate the matter, thereby seeming to minimize Israel’s great and very legitimate concerns. That letter, an attempt at balance and civility, resulted in the revoking of what some thought was a one-sided study piece. (You can read that letter here, and a critique of it.) So it has been an emotional few weeks talking about this stuff, with people I respect offering differing views, positions, and passions.  As I said to some friends the other day, I’m feeling kind of beat up.
I do not usually use BookNotes as a platform for expressing the details of my own policy views, and this post is not offered to you for that purpose, either.  Rather —  of course, of course — I want to highlight a book or two to help you sort through the issues, to offer some direct answers to tough questions, that I found helpful to get “up to speed” on the basics.
Our inventory of books here in the Dallastown bookstore about the Middle East, by the way, is pretty large and certainly diverse, so if you want more sophisticated, detailed, treatments just give us a call.  But if you need a quick read that is fair-minded, and up-to-date, allow me to recommend this.   It is a must-read for anybody who cares about this topic.

WE HAVE THESE AT 20% OFF and you can order them at the link below. 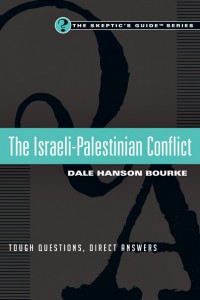 he Skeptic’s Guide Series: The Israeli-Palestinian Conflict  Dale Hanson Bourke (IVP) $13.00  First let me say that I’ve used other books in this “Skeptic Guide Series” and they are each excellently done. Bourke has traveled all over the world, is a first-class journalist, and while she has deep concerns about peace, justice, compassion, and other Christian virtues, her desire for fairly and clearly reporting the facts and explaining the background of the issues at hand are impeccable. I have admired her for the early books she released, and for her days as editor of the Today’s Christian Woman. (Don’t ask, but I used to read it, okay?) She’s a darn good writer.
The format of these “Skeptic’s Guides” is appealing as they are all published on paper that is just a bit heavier then usual, flexible and glossy, with full-color photos and just the right amount of helpful graphs, charts, and nice side-bars. The Q & A format is really helpful, and if you’ve ever said I wonder about… but maybe felt too dumb to ask, or didn’t know which website to check for a reliable (and concise) answer, any of these, but especially the one about the Holy Land troubles will be a fabulous resource for you.

Bourke has obviously read very widely in the field, has interviewed some key players 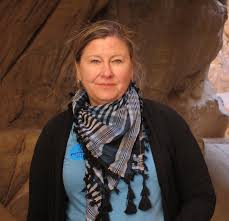 , and has done on-the-ground research.  That she firstly thanks the deeply respected Telos Group and their staff, including Todd Deatherage (renowned for balance and respect for all parties and for the trusting relationships they’ve developed with many important leaders on both sides of the Wall) I knew this was going to be a very rare, balanced book.

One reviewer (Mark Galli of Christianity Today) says she is “unmatched in giving an even-handed and readable account of controversial matters.”

Bill Hybells, founder of the influential Willow Creek Church (which has been very socially involved in recent years, by the way) writes this great endorsement:

It’s important to have civil discussions on difficult issues even when
we disagree. I’m thankful for the hard work of Dale Hanson Bourke, who
sifts through the thorniest issues–HIV/AIDS, global poverty,
immigration, even the Israeli-Palestinian conflict–to extract what we
need to know not just to get along but to make meaningful change in the
world. Her Skeptic’s Guides have been important for our church, and I
know they will be for your community as well.

It seems to me that although these short books are for those of us who need a quick primer, those who are already engaged in learning and advocacy will find them good resources as well. They are, as they say, “user-friendly” and great to use when preparing presentations, drafting letters, creating classes, or answering questions of whoever you got into a conversation with about these things.

I previously read her early one in the “Skeptic’s Guide Series” about global poverty — what a great little guidebook it is, useful for anyone who cares about world hunger — and her powerful one about the global aids crisis. (Order those from us, too!) I love the concise depth and balanced vision and informed background she is able to give to these complex topics in such a short, inexpensive, and colorful volume.

Another source of anguish for some of us this week has been some of the controversies that came into the spotlight this week regarding the detention centers for children of immigrants in Arizona.  Several related issues have come up in the news, and have been debated on-line in the last few days.  Again, few of those with whom I was in lengthy debates (who had strong opinions, based on one news report, about Who Was To Blame for some of the sad situation and failing policies there) seemed to have much actual data about the very thing we were discussing. I sensed that my interlocutors didn’t know much about the details or texture of the people or places involved, but, again, I didn’t, really, either. Once more, I realized that my own passion — not unlike a whole lot of people also posting on the web — gets ahead of me, and I have deep feelings and opinions, but sometimes not a lot of facts.  Do you relate?  We need answers!
And, yep, it was Dale Hanson Bourke again to the rescue with her latest little book in the 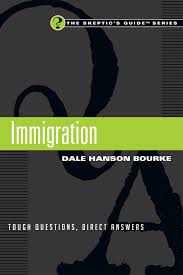 series called, simply, The Skeptic’s Guide Series: Immigration (IVP; $13.00.)  I have been involved in one way or another in some immigration right’s issues over the years, and have great appreciation for (may I say it again?) how darn complicated some of these policy matters are.  Still, at the very least, as people of faith (and others citizens) develop their opinions on things, besides a thoughtful, Biblically-informed worldview, we do need some basic facts. We need to know the terms being used in the field, and what reporters and solid activists mean by this or that. If you are like me, you will welcome this fine compendium of helpful definitions, a few easy-to-follow charts, a bit of historical background, and good answers, presented in a way which is fair-minded, thoughtful, concise and reliable.
With the tragic news unfolding this very weekend — in Gaza, the West Bank, the Golan Heights and other such places, and along the US Southern border, too — we need to know some basic data. We need to know the meaning of the words used in the debates, who the various stakeholders are, and what is at stake for each side. I am very, very grateful for having read these books, and, today, as I finished The Skeptic’s Guide Series: The Israeli-Palestinian Conflict, I realized that the maps and pictures and stories and history lessons and background pieces have reinvigorated my own interest and desire to be fair, balanced, informed and faithful.  Most of us want to be on the right side of history, standing up against injustices, adding our voices to the right.  But it sometimes isn’t easy to know just what to do, and who is who in the great issues of the day.

If you, too, want to be brought “up to speed” on where the “West Bank” is, about what The Temple Mount and Dome is, questions about Hamas or the differences between the PLO and the Palestinian Authority, about how it is that Israel is a religious but democratic country, about the history of the infamous refugee camps, and about the contested terms used for the wall, the green-line, even of the term “occupied,” I am sure Bourke’s little book will serve you well.