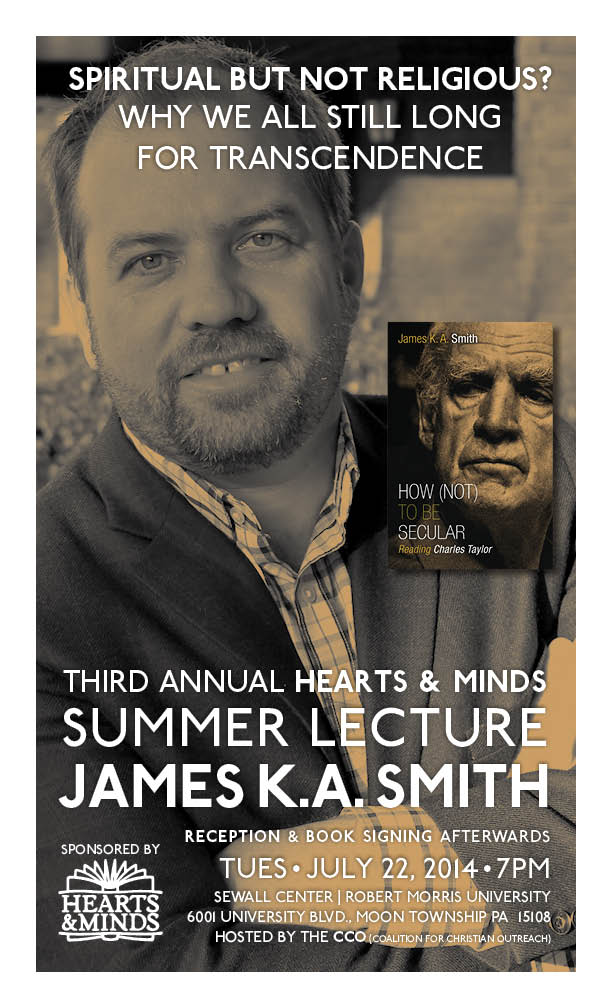 If you are friends with either Beth or I on Facebook, or a member of the Hearts & Minds Facebook group, or follow me on twitter, well, then, you know we are sponsoring a free public lecture with James K.A. Smith this Tuesday, July 22nd, in Pittsburgh. (See the poster below.)

Our very competent bookstore staff will of course keep the shop open while Beth and I sojourn West to be with our friends in the CCO campus ministry during one of their annual training events; we are even now pulling and packing boxes, lugging stuff up stairs and soon into our big van. We set up a pretty large book display there, and glad to share our curated wares with them.
Ahh, but what titles to take?

The CCO folks who do campus ministry are interested in almost everything, and they help college students relate evangelical Christian faith to the details of daily life. So we take theology and spiritual formation as well as books specifically about Christian engagement with art, film, music and culture. Of course we have books about higher education, that section on

the tables anchored by the lovely little hardback Make College Count by Derek Melleby (Baker; $12.99) and Learning for the Love of God: A Guide for Students by Derek Melleby and Donald Opitz (Brazos Press; $14.99.) We will be with Steve Lutz, too, and of course will promote his great book for collegiates, King of the Campus (House Studio; $14.99.) We have a lot of books on how to help students gain a vision for their careers and callings, with titles on vocation and work, of course promoting Steve Garber’s rich, eloquent Visions of Vocation: Common Grace for the Common Good and the new paperback edition of Every Good Endeavor: Connecting Your Work to God’s Work by Tim Keller and Katherine Leary Aldsdorf (Dutton; $16.00.)

We take books on developing the Christian mind and resources on sports, sex, and science. We have books on evangelism and books on prayer, books on politics and books on the arts, books on law and books on worship, books on food and books on nursing, teaching, and engineering.  CCO works hard to apply their robust and relevant vision of Christ’s Lordship to issues like racial diversity or global poverty and, naturally, to ordinary things kids go through on campus like eating disorders or roommate problems, stuff about digital technology and even how best to use video games. Did you know there were really thoughtful Christian books about such things?  If you’ve followed us for long, I guess you do.
So, off we go to serve the staff of the CCO, selling books that they will use in their ministries at dozens of campuses in the Mid-Atlantic region and beyond.
And then, in the middle of that, we and the CCO throw what I like to think of as a Hearts & Minds party. We underwrite a lecture series, and invite as many folks as can come to hear a famous author and a good time is had by all. (That’s a party in my book — right? And, as Andrew Bird puts it in one of his very cool songs, “there will be snacks!”)
Which brings me to just one of the glimmers of insight into this year’s Hearts & Minds lecture: Jamie Smith, who is a very serious philosopher, with scholarly books admired literally all over the world, who cares deeply not only about allowing his faith to be formative and controlling of his academic work, also cares about relating his scholarly research not only to the academy, but to the church and world. And he loves pop culture — I’m sure he got the Andrew Bird “Tables and Chairs” reference. He is immersed in indie rock and contemporary cinema and the best modern novels. In fact, I have reason to think that in his Pittsburgh lecture this Tuesday he will site Infinite Jest by David Foster Wallace and the upbeat, melancholy songs of Death Cab for Cutie.

(Just notice how he uses music lyrics in this beautiful, new piece in Comment.  Did I mention he edits Comment?)

I suspect that you, too, believe that God cares about all of life, that we not only may, but should, think seriously about all manner of

things in popular culture and, empowered by God’s grace and Spirit, dive deep into the real world around us, messy as it is.  Almost like the Jewish exiles of old, we are called to help the flourishing of our world; we are called to know the world around us. That DVD we were promoting last week gets it right: For the Life of the World, indeed.

Maybe that is why you are a customer of Hearts & Minds, you want to support a business trying to work this stuff out, and help you in your own faith journey.

So there is a lot to know, a lot to learn, new habits to embrace, and books can help us on our way.  I’m sure you believe that.
My own passion for this kind of missional Kingdom vision, that insists that all of life in God’s ordered creation is spiritual and that true faith is lived out in the daily, mundane stuff of ordinary life (as well as in big and important gestures of being involved in whatever may be the burning issues of the day, taking up causes and involvements in social initiatives with winsome passion and gusto, giving ourselves away to the needs of the world) was formed in many ways by the CCO’s ministry among students when I was in college in the early and mid- 1970s.  And then, more so, when Beth and I worked with them in the late 70s, helping in a small way to create that little conference now known as Jubilee. 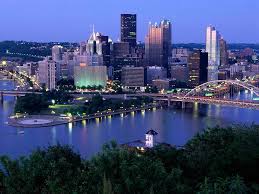 PITTSBURGH
For these important reasons, although we are not “from” Pittsburgh, we go back to the Three Rivers to co-host with the CCO a public event that tries to illustrate and underscore, celebrate and extend this heritage of proclaiming the good news that all of life is redeemed. For some of us, it is what (drawing on Al Wolter’s influential Creation Regained, perhaps) we used to call a reformational worldview.
And this year, James K.A.Smith is our man, and man, does he do it well. 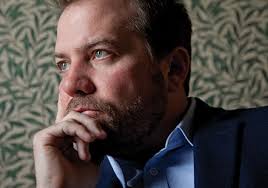 As I mentioned, Professor James K.A. Smith captures much about contemporary culture, and he is very much in tune with music and art and architecture and movies; he experiences
and engages these artifacts from within his classic, historic, ecumenical, faith. He sometimes says he is Pentecostal — he wrote one serious book about being a Pentecostal philosopher called Thinking in Tongues (Erdmans; $19.00) although he is also a member of the Christian Reformed Church (he teaches at their flagship Calvin College in Grand Rapids.) In most of his writing, though, one senses a deep loyalty to the grand apostolic tradition, to the communion of the saints in the one, big Body of Christ; in his book Imagining the Kingdom: How Worship Works (Baker; $22.99) he offers a phenomenology of worship that is resonant with many of the best liturgical thinkers these days, Anglicans, Lutherans, Roman Catholics and the Orthodox, even. I guess he is a lower case c catholic and a capital K Kuyperian. In all of his body of work he is giving a fascinating and generative account of this grand story and how it can shape our deepest desires, our life and times and how we “do life” together in this 21st century as only such a faith-based philosopher can.
HOW (NOT) TO BE SECULAR
The topic he will be addressing at the CCO/Hearts & Minds Pittsburgh Summer Lecture is 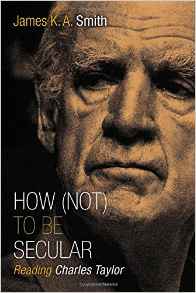 based on his very thoughtful recent book called How (Not) To Be Secular: Reading Charles Taylor (Eerdmans; $16.00.)
As you can see on the poster below, the title of his talk alludes to the much-discussed “nones” (those that checked “none of the above” in the religious category in the recent census and other surveys and polls.) Many people today in the West, especially younger adults, including many who have had some connection to the church, call themselves “spiritual but not religious.”  Much ink has been spilt and every denomination is pondering what to do about this growing crowd.
Perhaps the first thing to say is that we all (still) long for transcendence.
And Smith maintains that the massive Harvard University Press book by the eminent Canadian philosopher Charles Taylor (The Secular Age) helps us understand our times and those who might be caught in the Death Cab for Cutie/David Foster Wallace world, a world that although not overtly religious in any conventional sense, is still haunted; our longings are freighted, there are signals of some desire for transcendence nearly everywhere. We don’t so much live in the land of the new atheists, and while every Christian publisher has released apologetic resources to counter them, Taylor and Smith believe this isn’t quite the needed approach. Smith’s own new book, How (Not) To Be Secular, is, to put it simply, a guide to the Taylor tome, which gives a better account of what is going on these days, even given the rise of the new atheists and their hostility to Christianity, and what it might mean for Christian witness.
Smith’s book draws us into Taylor insights, and then adds his own explanation not only of Taylor’s insight, but what gospel-centered folks might do, what difference it all makes.
Tim Keller, the thoughtful pastor of Redeemer Presbyterian in New York, says of Smith’s book

This volume (if read widely) could have a major impact on the level of
theological leadership that our contemporary church is getting. It could
also have a great effect on the quality of our communication and
preaching.I highly recommend this book.

LINKS AND REVIEWS
Here are a handful of resources to help you learn more about Jamie Smith and some of his many books.  I do hope that if you are anywhere near Pittsburgh this Tuesday, you’ll join the party.  If not, watch these videos, order some books, and be with us in spirit.   Thanks!

So, Jamie wrote this series of letters to a fictional young man and a young woman, which guides them through the strengths and weaknesses of this new interest in old Calvinism and frames their interest by the bigger question of their own spiritual growth and involvement in the broader church. Smith’s fondness for Augustine comes up, here, again, and it is warm and inspiring. These letters are theologically informed, pastoral, interesting, and very, very helpful for anyone wanting to grow in their faith.  For those who care about these details, I tell folks that these letters draws the reader along, from Piper to Kuyper. I also tell customers that even if they are not young or not Calvinist, this has wisdom for which you will be grateful and glad. Letters… is a quiet little book that deserves a wide readership.

We have all these books at a BookNotes discount — 20% OFF.
Just use the link shown below, which will take you to our secure order form page.
Or, come to Robert Morris University near Pittsburgh this Tuesday and join the party.

Thanks to Ned Bustard of World’s End Images for the poster. He desires the Kingdom.