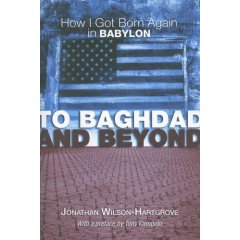 I hope that readers took me up on the invitation to read my long reflection on the wonderful and important new book by Shane Claiborne and his pals at The Simple Way community in Philly. You will not want to miss Shane’s punchy and powerful reflections, The Irresistable Revolution and I hope my mild critique didn’t dissuade anybody from taking him seriously. His book, I believe, deserves to be discussed and debated.
I would like to suggest another book, a parallel book, in which, interestingly, Shane makes an appearance. (His broken arm episode from the wreck while doing peace work in Iraq is quite a story, and I was glad to read more about it in this new book.) It is calledTo Baghdad and Beyond: How I Got Born Again in Babylon, written by another formner student from Eastern U., a thoughtful young man involved in their best classes: Jonathan Wilson-Hartgrove. Not unlike Shane, young Jonathan came to college with a conservative, evangelical faith intact, a sharp mind and a desire to take his discipleship seriously. He ended up embracing a pretty radical tradition, seeking to embody faith by following ancient practices, and thinking through social issues in light of the primacy of loyality to Jesus.
The title alludes to the heart of the narrative—a peacemaking expedition with CPT (Christian Peacemaker Teams) to be a Godly presence and international nonviolent witness to the possibilities of peacebuilding ways of solving international problems. You may know about CPT due to the recent news reports of a recent delegant (a Candadian Quaker named Tom Fox) who was murdered after being kidnapped there. There has been much right-wing sputtering about the military-led rescue of the remaining captured peacemakers and this book is a wonderful window into some of what goes on in these trips. It is by turns frightening, funny, theological and a great travelogue, all in the genre of spiritual memoir. It allows us a glimpse into the soul of one who would put his life on the line for peace and helps us understand the Christain basis for peace activism in the manner of Voices in the Wilderness or the Christian Peacemaker Teams. Our family has been aware of the history of the CPT movement (my sister-in-law went on an early, dangerous, version of this, Witness for Peace, into the war zones of Nicargua during the Contra war there.) Jonathan’s book means very much to us for any number of such reasons.
Upon returning home—especially with a tender recollection of being rescued by a Muslim doctor in the town of Rutba, where their hospital had just been bombed by coaltion forces—Jonathan and his wife helped start an intentional community, living among the poor and trying to flesh out a more overtly and prophetically Christian way of life, here, amidst the underbelly of the American empire. The Rutba House community is in Durham NC. (Learn more about their work at www.newmonasticism.org.)

As contemporary American Christians read the book of Revelation within the dominant societal system in which we live, we must ask ourselves whether or not our own nation-state has become the modern equivalent of the Roman Empire. We must ask “Has America become Babylon?” That is the question that Jonathan Wilson-Hartgrave endeavors to answer.

Tony Campolo from the Preface

edited by Trician Gates Brown (Herald Press) $17.99 From Hebron to Haiti, Iraq to Columbia, these brave folks are doing what we all know needs to be done if the faith-based peace witness is to have integrity: sacrifice for peace as much as others sacrifice for war. Highly recommended.

To Baghdad and Beyond Jonathan Wilson-Hartgrove (Cascade Books) $16.00